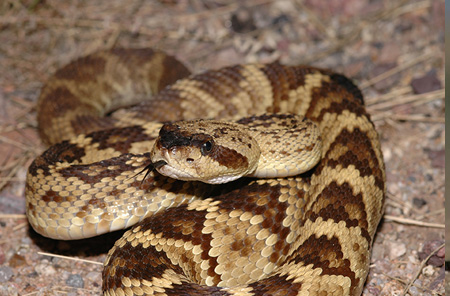 We have numerous types of snakes,venomous and non-venomous, in the area. Snakes are cold-blooded animals, which is to say their body temperature is that of the surrounding climate. They are unable to lower their body temperature so they come out and sun on cool days and crawl in holes or under things on hot days. Snakes become more active at night during the summer due to the fact that they are most alert in temperatures ranging from 80 to 90 degrees. They will die if they reach 116 degrees and become very inactive at 40 degrees. Snakes like to stay in holes, under debris or things, inside garages, or even under your patio accessories. The majority of snakes are harmless and should not be killed so being able to tell which is poisonous is important. When the non-venomous snakes are killed it allows the venomous population to grow even more. An easy way to tell the difference between them is that non-venomous snakes have a rounded head like a spoon, where the venomous snakes have a triangular head due to the venom glands. All snakes can swim, most venomous snakes will swim with their lungs inflated, leaving their body afloat where harmless water snakes will have only its head above the water.

The cottonmouth or also known as water moccasin and the diamondback rattlesnake are two types of poisonous snakes .Cottonmouths have a thick body and can get up to 3 or 4 feet long, and are black in color with a white stripe along the side of their head. Young cottonmouth snakes will have a bright yellow tail. They are found in or around water and are loners not generally found in groups. Diamondback rattlesnakes are known to live in groups in the winter months for warmth and found out alone in the warmer months. Rattlesnakes have a heavy triangular head and elliptical eyes with a tan or brown background surrounding a series of diamond shaped blotches. They have a button like rattle at the end of their tail which they shake as a warning when feeling threatened. Rattlesnakes mate in the spring and the females give birth to as many as 25 young which are fully capable of delivering a venomous bite at a young age. We have removed all types of snakes from garages and people’s property in the area. We also will consult with you as to what is conducive on your property for snakes.

If you are in doubt as to the type of snake then treat it as venomous.It is a much safer and better idea to call on people that know how to handle snakes rather than trying to take care of it yourself. We have technicians that are specialists in snakes and their removal. If you make the wrong move it could result in you being struck by the snake and no one wants that.