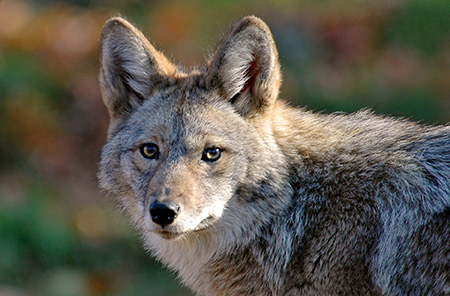 Coyotes are currently under a statewide rabies quarantine imposed by the Texas Department of Health and it is prohibited to transport or release a live coyote in the State of Texas without a license to do so. Coyote sightings are usually reported during the night but have been seen in the daylight hours too especially at dawn and dusk. Many people mistake the coyote for a dog due to the fact that coyotes are the size of a medium sized dog with thick long fur. They have a bushy, long tail with a black tip that is usually carried in a down position. Their nose is slender and long and their ears are pointed. They range in color from light tan, dark tan, red, grayish black, and blonde and are often mistaken for a German Shepherd.

If you encounter a coyote, never take your eyes off of him and get away from him as quickly and calmly as possible. They will normally run from you, but if it’s a mother with young or they feel you are a threat or prey, they can attack. Coyotes are territorial and will establish and maintain a territory of anywhere from 2 to 30 square miles. They travel in a pack consisting of parents, pups and sometimes pups from the year before. They defend their territory from any coyotes outside their family pack. The breeding season is in February or March and the pups are born in April or May - 4 to 8 pups are the normal birth rate. They feed on anything that is easily obtained and available such as rodents, rabbits, birds, snakes, frogs, insects, animal/fish remains, trash, pet food left outside, domestic pets, fruit, and berries. Since they eat such a variety of foods, they can adapt to city life very easily.

We can trap and remove the coyotes on your property. We have trained technicians in the trapping of coyotes and all other wildlife to assist you with your nuisance animal problems.